My heart could seriously burst.! :)

So, here it is at 1 o'clock in the morning (6pm back at home)... I cannot sleep any longer! So I figured I'd write a little about the first couple days...

So, the trip to DC went well! We met a very sweet elderly couple at our hotel in DC that lives just 20 minutes from us. How crazy and small is our world? The following day, at the airport as we were waiting for our plane, we met another younger couple who was travelling the same flight as us. They are also adopting, they are Bible-believing Christians, and she homeschools. It was really neat to meet another couple and we sat and chatted with them until it was time to board. On the flight to Addis, we sat next to an Ethiopian woman who looked a bit older than Michael and I. We saw she was reading a Bible and Michael leaned over and said "I see you're reading the Bible! Are you Christian?" And she was! So we talked with her off and on throughout our very long 13 hour flight about church and whatnot. There were LOTS of kids and babies on this flight. And I'd say just about every one of them in our section of the plane somehow knew that Michael was the one to go to (I'm serious, ANYWHERE we go, kids are just drawn to him). Babies, toddlers and little ones came up to him to play with him, sit in his lap, etc. It made Michael and I so giddy and excited to see OUR little ones! All those little moments were blessings for us during this trip. Little "God-sightings".

Michael and I did not sleep much on the plane. Partly from being excited, partly from not being tired, as it was a flight from 11am until just a bit after midnight US time. Michael and I stay up until that time, so it was hard to sleep and exhaustion really set in as we waited in line for an hour at the Addis Ababa airport for visas. Finally we got those, converted our US dollars to birr, got our luggage and went out and found our awesome in country director Woudneh! Excitement and adrenaline kicked in at that point!

We made our way to the guest house/transition home and came inside since it was raining. Just a few minutes later, I heard a VERY excited little boy running around the front of the guest house. Here in Ethiopia, you take your shoes off before entering a home, so he quickly took his shoes off and ran into the guest house, straight into Michael's arms. It was SO precious! (I got a video of it, and will have to post it when we get home. The internet isn't quite fast enough to upload videos here.) Mikiyas would not stop hugging and kissing Michael, rubbing his arm, and just snuggling into him, almost afraid to let go. So all while eating breakfast, he sat with Michael rubbing his cheek along Michael's arm. Michael of course was absolutely loving it! Eyob was brought in at the same time and went to me, but didn't have much reaction. He just kind of stared, a lot like the first time we met him. He warmed up as the day went on and we found out he is crawling up on his hands and knees, whereas last trip, he was barely sitting well and barely doing the army crawl on his belly! He also has 2 teeth! Eeek! Just so excited he's not walking, yet, and we get to witness that first at home! :)

We napped a bit after lunch and spent some time outside playing with all the other little ones before we came back in as it got colder to spend some more one on one with Mikiyas and Eyob. We then ate supper, gave the kids back to the nannies and decided to go ahead and head to bed at 8. 5 hours later, we both are awake and can't sleep anymore! Jet lag stinks! But oh, am I SO happy to have these two guys close again! We're going to see about having them sleep in our room tomorrow night!!

Tomorrow is our embassy appointment (at about 6am FL time)! Pray that goes smoothly! :) 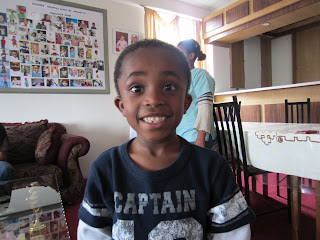 He is SO happy we are back! (And also pretty happy with his new clothes and shoes! Finally his very OWN clothes!) Eyob. He had just woken up from a nap in my arms! Hence him not being quite awake! 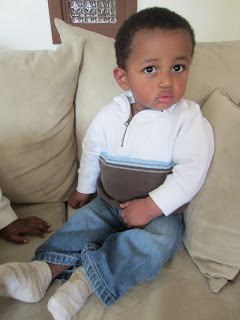 Still not too sure, but isn't he so handsome? Eek! 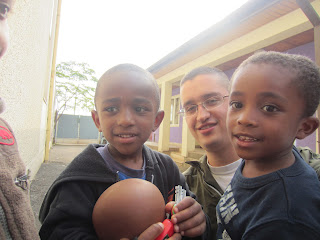 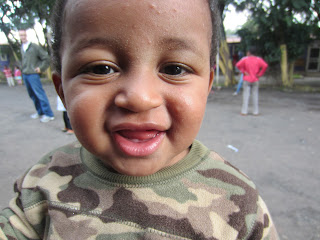 Eyob! You can see his new bottom tooth! 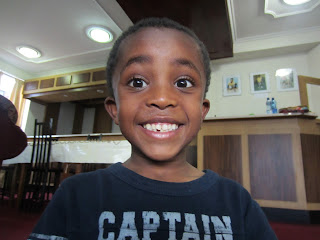 Hours later and STILL excited! He can't wait to see Ilana and Aydan! 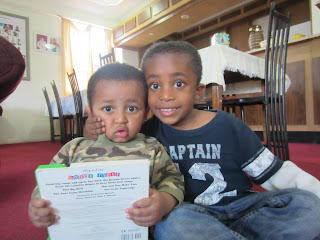