After weeks of receiving donations, our house, garage, and lanai became consumed with "stuff"!

Here is our garage 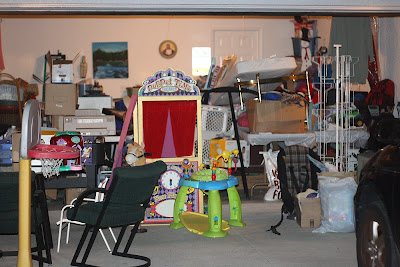 Our playroom - with Ilana and Aydan's toys taken out and donated toys put in. This was only about half of it! 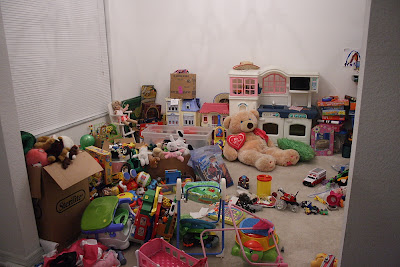 I spent this past week organizing and pricing the items and stayed up until past 2am Thursday evening (or I guess Friday morning) working on making up rice krispies, along with homemade cinnamon rolls to bake in the morning for our bake sale, then we woke up just a couple hours later to get started on setting up. That day went very well - lots and lots of people came, but we still had plenty left (and found even more in the house and forgot to put out)! Almost all of the baked goods were sold!


Bakesale items - thanks to my mom for helping bake some stuff - chex mix, crescent rolls, and cinnamon swirl orange bread! Thanks, Mom!! There were also cinnamon rolls in the styrofoam boxes and rice krispie treats. 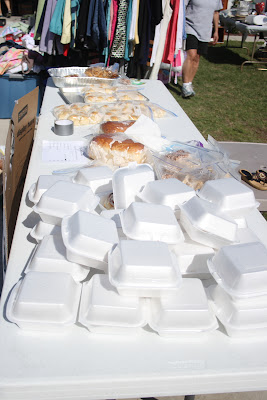 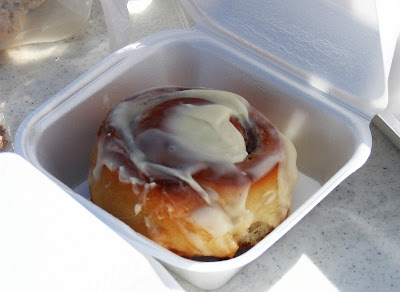 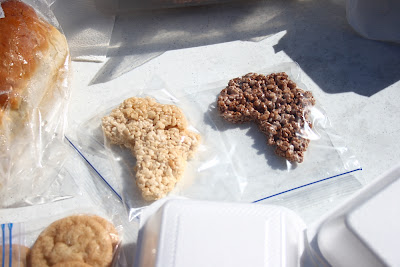 I made a huge mistake and forgot to put sunscreen on and ended up getting burnt! I was exhausted, stressed,  and overwhelmed and ended up bursting into tears for no reason around 2 o'clock as the sale ended for the day. Not really sure why! After that incident my mom and sister made me eat some lunch, which really helped! After pulling myself together and heading back out to start putting everything back up, I found something in our sidewalk. There has always been a little chunk missing, but I never thought much about it. I was carrying stuff into the house and glanced down and wanted to cry again, but thought maybe I was just seeing things and emotional. I called my mom over and said, "What does this look like?!?" And my mom said "No way! You're kidding me!" So... What's this look like? Call me crazy, but that looked so much like Africa (to me) and it was just the encouragement from God that I needed... I ended up going to bed early at 8pm after the kids went to bed and was up at 6 the next morning to start the yardsale again! 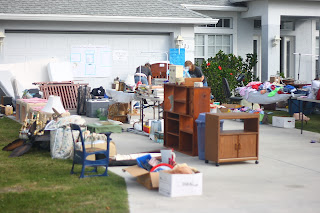 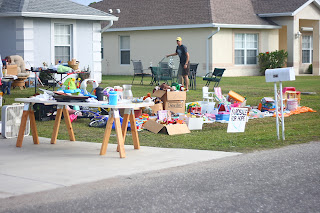 Ilana found a little friend to join her! 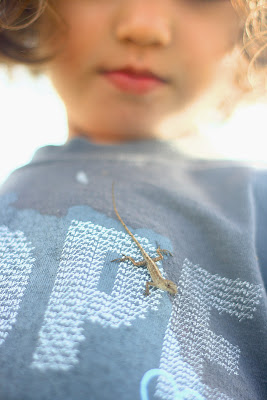 And Aydan was just enjoying the baked goods! (In our house full of stuff, we have somehow lost his glasses... :( We have NO idea where they are!) 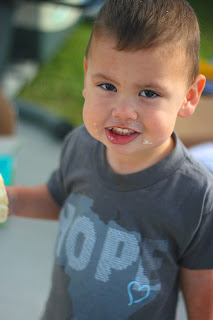 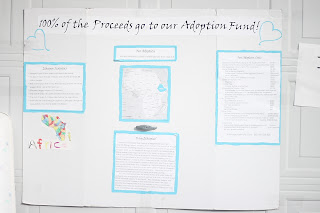 Overall, today went really well. It was much slower than Friday, but we were still blessed with a good attendance! Out of the probably hundred or more people that attended, we only got one bad/mean comment. A man had asked what the adoption fund was for and Michael explained that we were in the process of adopting from Ethiopia, and he made an awful face and said "Well, I'm not going to buy anything then. There are kids here in the United States that need help. We don't need to be helping those other countries." I held my tongue and responded with "Well, God leads everyone in different directions!" I just let it go and remembered that despite his hurtful comment, he was still loved by God, and I should love him too....

Anyway, I learned my lesson from the day before and made sure to put sunscreen on, but all throughout the morning and afternoon my arms, neck and face still seemed to be burning and getting more red, so I'd just keep slathering on the sunscreen. I learned a very valuable lesson - always check the expiration on sunscreen... Mine had expired Feb of 2010!! Turns out, the bottle I grabbed, which I thought was a new bottle I just bought a few months ago, was actually a bottle of the same kind, but a few years old. It didn't help at all and I am burnt even more! :(

Anyway, the sale drew to an end and we still have lots left, but we'll be donating the remaining to Salvation Army and Craigslisting some of the bigger items. I was tempted to do a "Fill a Bag Sale" (where you fill a bag with anything and pay just a dollar or two), but at this rate, I'm just too tired and exhausted to do it again... But again, God encouraged us in His own special way. It was a reassurance for me; that we're still following God's plan! We were cleaning up and we had a cooler full of water from ice that had melted, so I dumped it out. Didn't think much of it until Michael said "Is it just my imagination, or what does that look like?"

The water I had dumped from the cooler, that ran down the driveway. How it ran to look like this, we have no clue... It even came back together at the top, which is hard to see, since it's dark, but what do you think (minus the little bit down the bottom middle)? Africa again? Or maybe we're just nuts! :-P 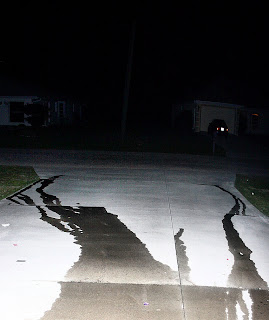 I just wanted to say to everyone who came out, bought stuff, and supported us: THANK YOU! From the bottom of our hearts, we appreciate it SO much! For those who couldn't come, but prayed for us, thank you, too! We couldn't have made it without your prayers!

A special thank you to friends and family that helped us make this yardsale happen! Thank you to my family and all your help!! And a very special thank you to my sister, Becky, and my parents who helped us SO much in preparing for the sale, pricing items and helping organize, along with being here all day yesterday and today (even waking up super early to help set up). I couldn't have done it without you and don't know how to thank you!!

Now, are you curious for the total from the sale? I was hoping we'd make enough to pay for the rest of our dossier and possibly for the authentication fees. We needed $1800 more for the dossier or $2300 more for the dossier AND authentication fees... We made $1773.25! Awesome, huh?? Isn't God amazing?! He is providing every step of the way!!! Overall, it was all SO worth it!! (Just please don't touch my arms! I'm hoping to wake up and have a tan instead of a burn... We'll see! ;) )
Posted by The Nunez Family at 11:35 PM