Exactly one year ago tomorrow, on June 28, 2010 at 12:09 in the morning, I woke up from a dream. I had dreamt about singing praises to God. I woke up and for the first (and so far, only) time in my life, I heard God speak to me. Audibly speak! Despite being startled and confused, I immediately knew Who it was. No doubt about it... It was my Father. And I remember it like it was yesterday! He said "Great things are going to happen to you." And I of course had the human response and asked when and he responded with "Just wait." (You can read more about the dream in my original post last October HERE, if you haven't already.)
Who would have known that a year from that moment, we'd be well into the process of adopting a precious child from Ethiopia? After that dream is when we started feeling more nudges toward adoption and later, specifically toward Ethiopia. What was crazy was 2 months after my dream, Ilana drew this picture (keep in mind she was just three! ;) ): 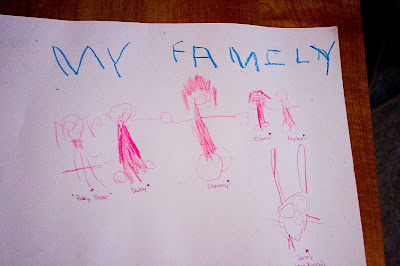 A picture of our family, with one addition, labeled "baby sister". Except, according to Ilana, it wasn't a baby but a younger kid that we were going to "get". Not have, but get. She had no idea that Michael and I had begun discussing adoption. She had no idea what adoption even meant, but she just KNEW that we were going to "get" a new sibling for her. Some may say it's just coincidence and that it's just a little girl wanting another playmate, but if you know Ilana, you know that she's always had some amazing intuition... God was beginning to break her heart for orphans, just like He was doing to Michael's and mine...
So, here we are! June 27, 2011... Our dossier is currently in Washington DC being authenticated and we will be placed on the waitlist probably within a week. It's just absolutely amazing to think back on our journey along the way and how God has literally provided EVERY single step of the way. That God has been there, walking through each process with us, holding our hands, guiding us toward His will for our life. His will for our family.

Lots of people tell us "Good for you!" "You guys are doing something great!" "That child is going to be blessed!" I appreciate it, but ultimately, I want people to see the good that GOD is doing.
I want HIM to get the glory.
I want HIM to be recognized through every single step of this adoption process.
HE's doing this.
HE broke our hearts to make us see the fatherless through HIS eyes.
And really, WE are the blessed ones, that He called us to adopt.
WE are the ones who are going to be blessed by this amazingly, beautiful child God PERSONALLY picked out for us.
If people get just ONE thing out of our adoption journey, my prayer is for them to see God's amazing hand throughout it. To see His provision, His guidance, and His little miracles along the way. Sometimes I honestly just burst into tears in thanksgiving, wondering how in the world did we get SO stinkin' lucky to do this?!
We are BLESSED!!!!
Posted by The Nunez Family at 8:02 PM